Back on the train, we were both as exhausted as we had ever been, yet what came next was, perhaps, the part of our trip that we had been waiting for most: Manarola. I think it’s safe to assume that most people have a prior image in their minds when they think of this part of the world. A cove painted by sunlight, full of sailboats and swimmers, lovers and dreamers, all surrounded by a towering cliffside of vibrantly painted buildings that seem to have been dropped there from another world.

Leave aside the swarms of sweaty tourists, the countless storefronts hawking cheap souvenirs, and the less-than-saturated, sun-faded colors of those same buildings and you have Manarola. 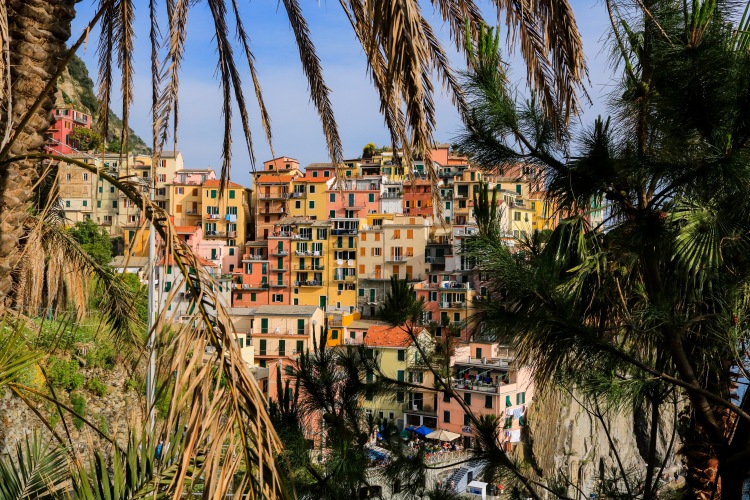 This was the village that I was most excited to visit because, after all, the photos of what you might find online in countless travel magazines are undeniably breathtaking. It looked to be another one of those places where the word worry held no meaning. And on some level, that is entirely true. But when you get off the train you are thrown right into hundreds of tourists all pining for the same food, the same tchotchkes, and that same exact picture. By this point in the day, I was beginning to feel overwhelmed by all of it, actually. The heat, the endless audible stimulation, and the pressure to take ‘x-amount’ of photos just to prove that I was actually there. But I wanted to be there while I had the chance, and not have to rely on cold pixels and chaotic journal entries just to remember what flavor gelato I ate. With all of that in mind, Harman and I continued down the main strip as we made our way to the iconic viewpoint.

As you approach the heart of the village, you are given a few different paths to follow the circular construction of the outlook. There’s the main trail that brings you directly to the vantage point, a second, more narrow walkway that declines into the Sea, and a third that takes you up and around the right side of the cliff through a scenic little park, which also gives you the option to peek into an old mausoleum through rusted iron gates before continuing to the viewpoint. We chose the latter and enjoyed a few unanticipated quiet moments away from the main crowd. By following this direction, you don’t really have a clear view of the cove and colorful buildings. But it gives you a chance to appreciate the fact that, once again, people have been calling this tourist destination home since as early as the 11th century.

At some point, Harman and I got separated. This happened so many times over our three weeks that it almost like we were having a competition to see who could get distracted the most. But I began walking through the park, beyond a few memorial statues, down a flight of stone steps, and around the curved path carved into the cliff that sets the stage for one of the most famous pieces of architecture in the world.

Admittedly, the spectacle of it all is lost a bit due to countless families gawking for the exact same picture, selfie-sticks waving haphazardly, and every amateur photographer in the known universe pretentiously looking through the viewfinder as if their version of ‘the shot’ is somehow going to change the artform forever (myself included.) But all of that being said, I am happy to say that I was able to see the village in all of its unedited, unenhanced real-life glory with my own eyes. I took plenty of photos, including this panorama that I am particularly proud of (which happened to be taken with a five-year-old Nexus 6, for those of you who are curious.) Not that it hadn’t been done a million times before I arrived and will continue to be done indefinitely, but the image is mine; That moment and memory belong to me. And I feel as weightless now just writing about that day as I did when I stood there in-person.

Soon after taking the shot I turned my camera off, put my phone back into my pocket, and made good on the promise I made to myself to truly be present when it counted most. I wanted to stop and hear the silence, or the noise, or whatever the Universe had planned to offer me at the moment. The air was salty yet sweet, the water of the Italian Riviera playfully dancing with the scent of waffle cones and sour grapes. The water was at momentary peace with itself, only disturbed by the occasional fisherman making their way home for the day. The sun was still high in the sky despite the ticking of the clock, almost like it refused to begin its descent because it just couldn’t bear to go a single moment without looking at this place.

But then a pleasant Asian couple snapped me from my romantic, melodramatic haze and asked if I could take their photo. I removed their iPhone from a selfie-stick and obliged, and from multiple angles, too. No filters were needed. Almost immediately after the couple carried on their way another person asked me to take a picture for them. It was decided: I’d spend the rest of my days as a portrait photographer on the coast of the Ligurian Sea. Payments could be acceptable in the form of wine, bread, and a humble follow on my Instagram page. Grazie! 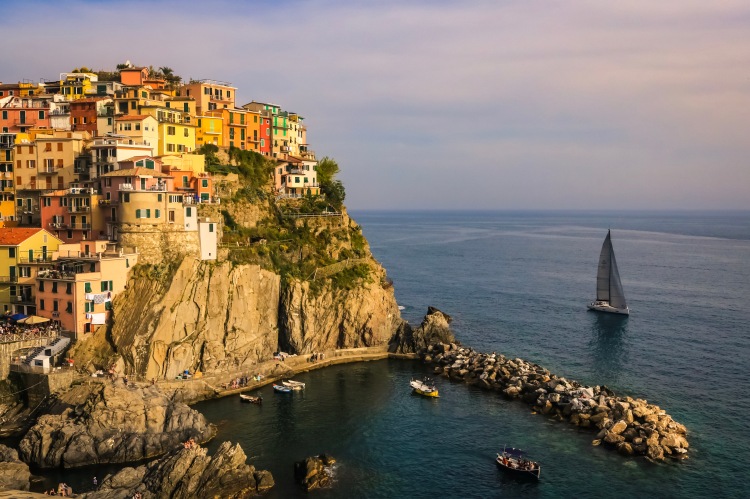 Harman and I eventually reunited and we both just stood there, balancing an incoming attack of vicious hunger and lurking sleep deprivation while doing our best to appreciate the beauty of the world that happened to be sitting right in front of us. For all I knew, if we weren’t careful we might have been there until the next morning’s stream of tourists poured to rip us from our comatose. Walking to make sure we stayed awake, we were brought down close to the water where another rocky outcrop like that of Monterrosa was transformed into a make-shift diving spot. Only this time there weren’t any of those pesky ‘No Diving’ signs around; Only a small crowd of strangers from around the world watching from the sidelines, applauding each time one of the teenagers successfully lept from the top of the rock and landed in the Sea without too much bodily harm. Worry was foreign to us all once again.

But it was getting later than we had anticipated, so we decided to catch the train if we hoped to get to Riomaggiore in-time before running off to Portovenere later that evening. When traveling on a schedule you only get so much time to have experiences that sometimes require days to properly appreciate. It can be discouraging, yes, but it shouldn’t stop anyone entirely from still doing their best to get out into the world, even if they’ve only got a limited amount of time to do so. In some ways, it focuses your travels with this heightened sense of urgency so that you visit the places that are truly speaking to your soul.

I had wished to go to Cinque Terre – to see that iconic landscape for myself – for as long as I could remember, and I had done just that with my best friend beside me. If God happens to be real, or if there is some sort of omnipotent being out there in the Universe, my bet is that She lives in Manarola – or at least someplace just like it.

Sometimes what we want most is nothing more than an illusion we disguise as reality in order to protect us from the truth we refuse to confront. But other times our realities can still provide us with a little bit of practical magic.

Harman and I still had one village left to breathe in, the train was pulling into the station, and once again we’d be fighting for a seat. There was no time left to think too much.

There was only time left to be.